
Confirmation




Have a question or comment?
Please drop us a note.
Request a follow-up and demo.
Don't have an account?
Sign Up
Download the App
For Secure & Continuous Backup and Sync
backup

Continually backup and protect your files using an innovative and patented multi-cloud security technology. Access and share your files from anywhere.
Multi-Cloud Technology
CloudJuncxion's patented security technology protects your data by encrypting, fragmenting, and dispersing file fragments across multiple heterogeneous clouds such as AWS, Google, and Azure. Fragments stored in a cloud are undecipherable without access to fragments in other clouds. 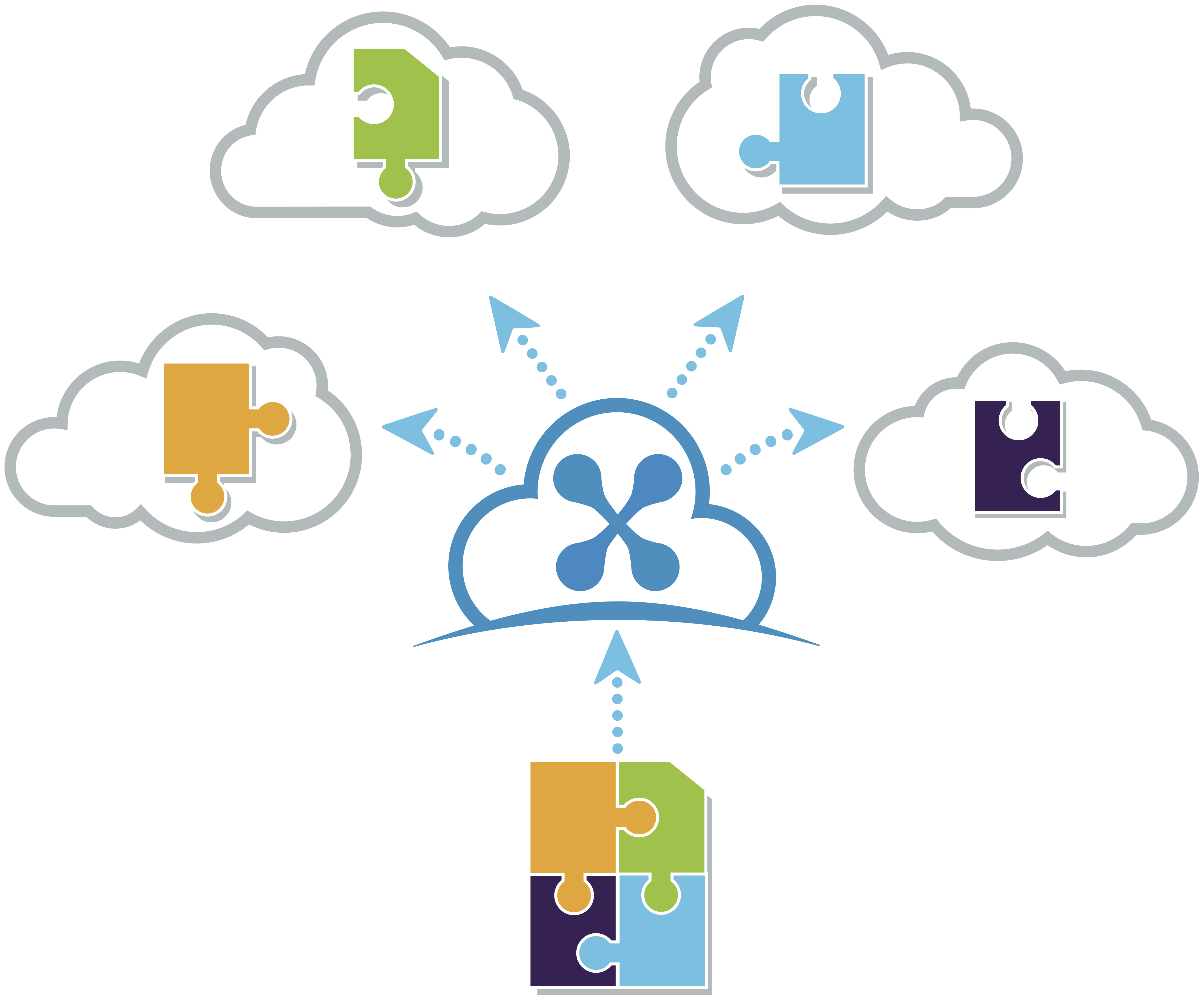 Learn More
Get Started
Continuous Protection
Files and folders are continually backed up as and when they change. Simply drag-and-drop them into the CloudJuncxion Backup and Sync desktop console.

Restore, Access, or Share, With Ease
Restore lost documents or revert to an older version with just a few clicks. Access and share documents from anywhere using either the web or apps for desktop and mobile.

Share folders with other team members for project collaboration. Protect and control access with a comprehensive set of security options. 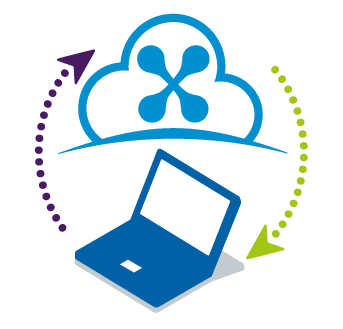 File fragments are transmitted from the end-point being backed up directly to the clouds without traversing any intermediate CloudJuncxion servers. This not only results in faster uploads but also improves data security and resiliency by eliminating any single points of vulnerability.
Protect Folders that Matter
Instead of backing up an entire drive, achieve greater efficiency by selecting folders that matter to you. Further optimize cloud-storage costs by excluding unimportant file types and sub-folders from the backup process.
Get Started
Smart Versions
Easily restore an older version of a file if it gets overwritten, deleted, or hijacked by ransomware. 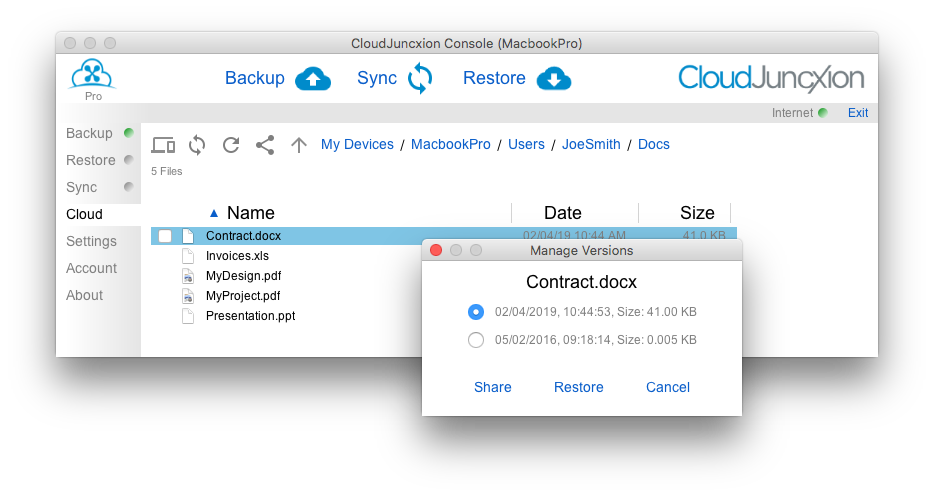 Automatic Encryption
Besides fragmentation and dispersal, military-grade AES-256 encryption performed right on your device ensures that your data is always fully protected.
Get Started
Secure Sharing
Everything you backup is easily shared and accessed from any device using the web or the CloudJuncxion mobile and desktop apps. Dual-Factor Authentication, Link Expiration, and several other security features ensure complete control and protection of data you share with others.

Learn More
Access Logs
All backup, sharing, and restore activity is logged and accessible from your account using the web. You can also easily revoke links for files and folders shared with others.

Get Started
Sophisticated Sync Support
CloudJuncxion offers a versatile Sync capability for synchronizing files and folders across desktop devices. Designed as a separate feature compared to Backup, CloudJuncxion Sync works with existing folders and - unlike other services - does not restrict you to a pre-determined folder.
Learn More
Software
Backup and Sync are supported for Windows and Mac platforms and requires installation of the CloudJuncxion App.
Download the App
For Secure & Continuous Backup and Sync
share

Share and collaborate securely with anyone. Maintain control and privacy using a comprehensive set of security options.
Multi-Cloud Technology
CloudJuncxion's unique security technology fragments and disperses files across multiple heterogeneous clouds for storage and sharing with unprecedented security and privacy. AES-256 encryption further protects data in the cloud, while multiple security options allow control and privacy over the links shared with others.

Get Started
Multiple Security Options
Besides passwords, features such as Dual-Factor Authentication, Link Expiration, Link Revocation, and Access Notifications provide a comprehensive set of additional security options. From simple photos to highly sensitive documents, easily share and track files requiring varying levels of privacy. Set expiration times on shared links, and get notified when a document or folder is accessed. Revoke links as necessary for added peace of mind. 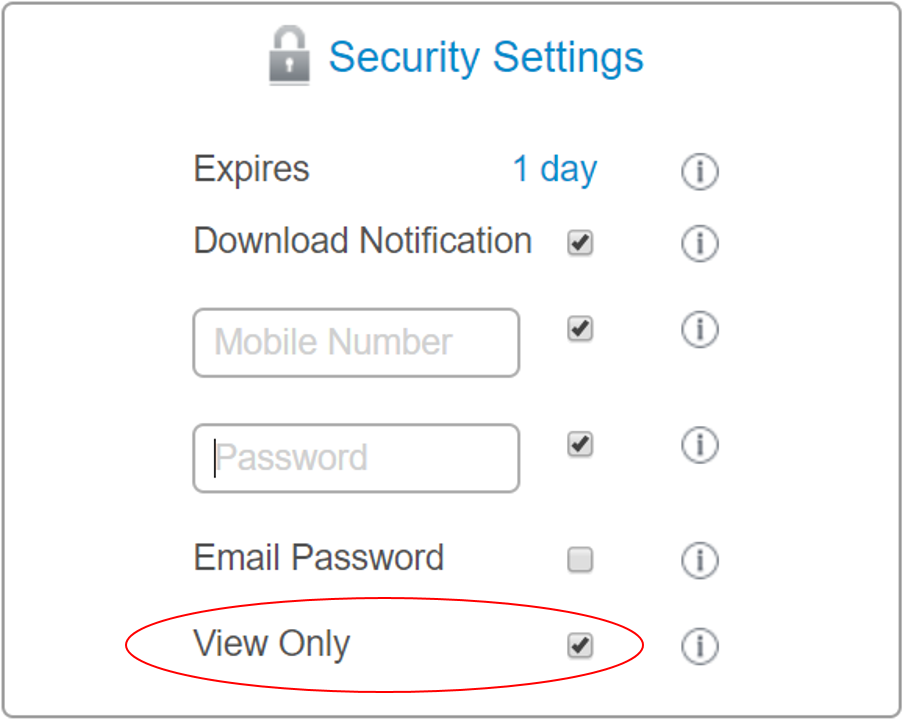 Securely Share with Anyone
Using multiple levels of authentication, securely share documents and folders with anyone with an email address. Recipients don't need an account with CloudJuncxion or special software for accessing shared links.
Get Started
Revoke When Necessary
Shared the wrong document or sent a link to the wrong recipient? Quickly revoke the link with a few clicks. When necesary, revoke all shared links older than a specfied date.
Collaborate using Shared Folders
Securely share project folders with others, and set access permissions as appropriate. Avoid use of emails for distributing attachments, and keep all documents organized by allowing creation of sub-folders in the cloud. Use drag-and-drop for easily uploading documents to the shared folder.
Access Notifications
Receive email notifications when a shared link is accessed or when documents are uploaded or downloaded from a shared folder. Disable such notifications as desired.
Get Started
Link Expiration
For added security for shared links, select expiration times from a list of periods ranging from a few minutes to several weeks. dummy dummy dummy dummy 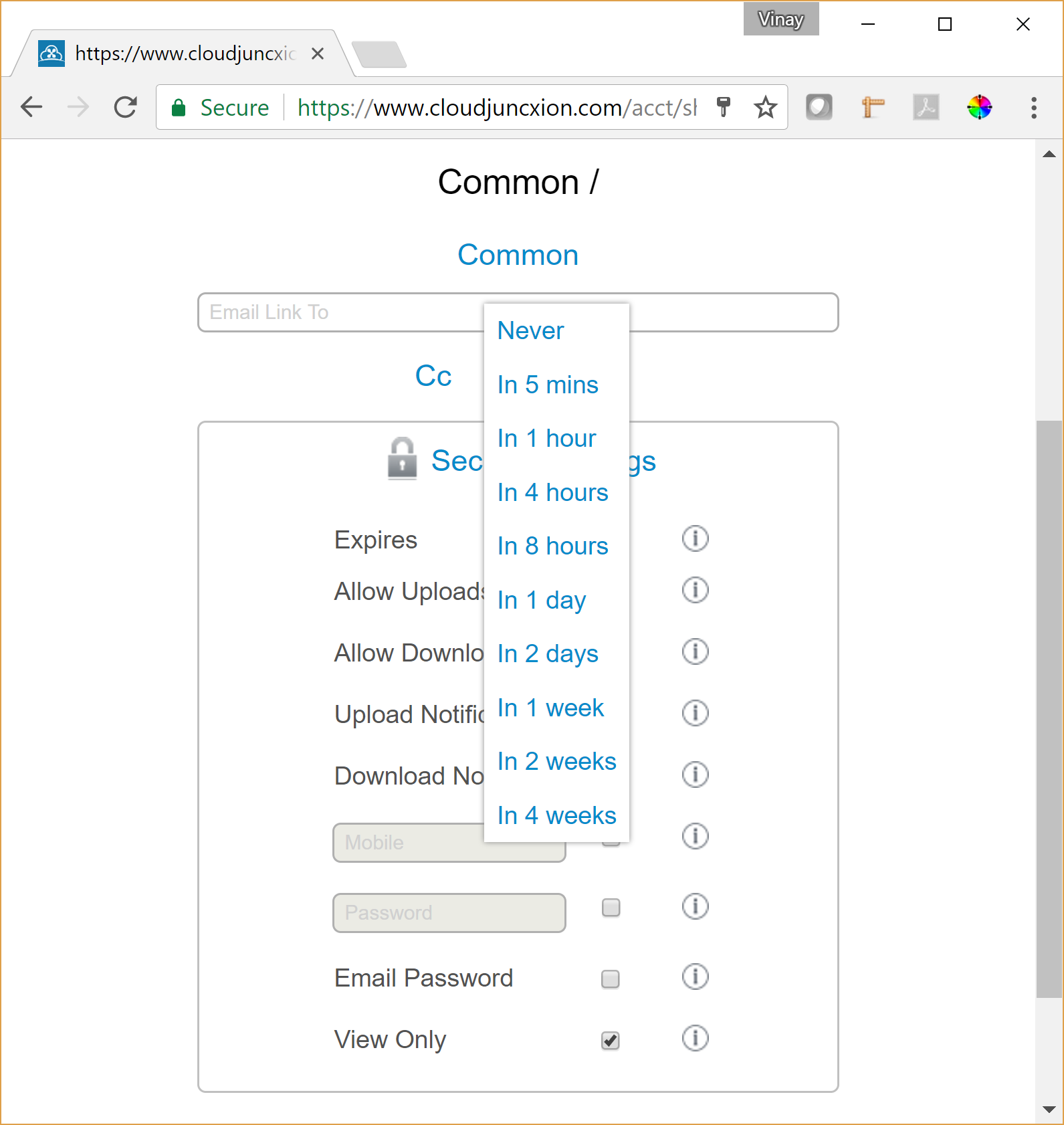 Access Logs
Track history of when shared links were accessed or documents uploaded or downloaded from shared folders.
Get Started
Software
Backup and Sync are supported for Windows and Mac platforms and requires installation of the CloudJuncxion App.
Download the App
For Secure & Continuous Backup and Sync
sync

Synchronize folders across devices using a secure and innovative multi-cloud architecture.
Multi-Cloud Sync
CloudJuncxion's unique security technology fragments and disperses files across multiple heterogeneous clouds for storage, sharing, and sync with unprecedented security and privacy. AES-256 encryption further protects data in the cloud, while use of Sync Groups provides flexibility and control over propagation of folders across devices.
Get Started
Work with Existing Folders
Preserve existing directories and work with folders you already have. There's no need to move your files to a special folder as required by other sync services.
Fully Integrated with Backup and Share
Sync works seamlessly with CloudJuncxion Backup and Share allowing access and sharing of files from any device.
Access Logs
Detailed logs track Sync activity with the cloud and all your devices.
Get Started
Sync Groups
Sync Groups provide greater security, control, and flexibility, and work with folders you already have. No copying or moving of files to a special folder is necessary.
Cloud as an Intermediate Folder
A Sync Group contains one or more device folders that get synchronized with each other. Each Sync Group also has a dedicated cloud folder for movement of files across devices in that group.

The example below illustrates how Sync Groups work: Consider three devices, A, B and C, each with two folders.

Sync Group S1 (see figure below) keeps folders X1 and Y1 (on devices A and B, respectively) synchronized because they are used for a common purpose (the same project, for e.g.)

Consider another Sync Group S2 that synchronizes folders X2, Y2, and Z1 across three devices A, B, C, respectively (see figure below).

Additions, deletions, or changes in one of the folders in Sync Group S2 get mirrored across other folders in that Sync Group.
Growing a Sync Group
You can expand a Sync Group by adding more devices as necessary. For e.g., S1 can be expanded later to include folder Z2 on device C.

Sync Groups operate independently, and you can create multiple instances for organizing and keeping various folders synchronized across devices and the cloud.
Security Considerations
Storing copies of sensitive files across multiple devices makes information loss more likely in the event of theft of a device. Ability to exclude devices from a Sync Group - notice the absence of device C in Sync Group S1 - helps reduce that risk.
Get Started
Software
Backup and Sync are supported for Windows and Mac platforms and requires installation of the CloudJuncxion App.
Download the App
For Secure & Continuous Backup and Sync
Privacy Policy
Terms
Use Policy
Copyright © 2020 CloudJuncxion, Inc. All rights reserved.